Confman provides simple means to specify and record configuration histories. The configurations that are entirely made of tags are called baselines.

The point of baseline maintenance is the ability to reproduce deliverable states.

By also accepting arbitrary changesets, one can record the construction history of a baseline and exchange intermediate steps.

Once you are done reading this overview, you might want to read the tutorial.

A confman specification is all contained within the .hgconf file.

The optional track attribute can point to a branch name, tag name, changeset id or a to a revset. This is how the baseline is declared.

Updating the baseline (i.e. providing new values to the track attribute if present) can be performed automatically with the hg cfbaseline command.

If the track attribute is missing or contains a branch name or a revset, cfbaseline does nothing.

If the track attribute contains a branch name or a revset, cfensure will always pull.

An application configuration includes the entries of some of its dependencies, for instance a web framework.

Hence we have shareable and reusable configurations.

Let's do with a small example:

In this, we build a configuration for a weather forecasting app using:

The expand= or expand.whitelist=<...> or lastly expand.blacklist=<...> notations indicate a repository that contain a configuration and should be used by confman as such. 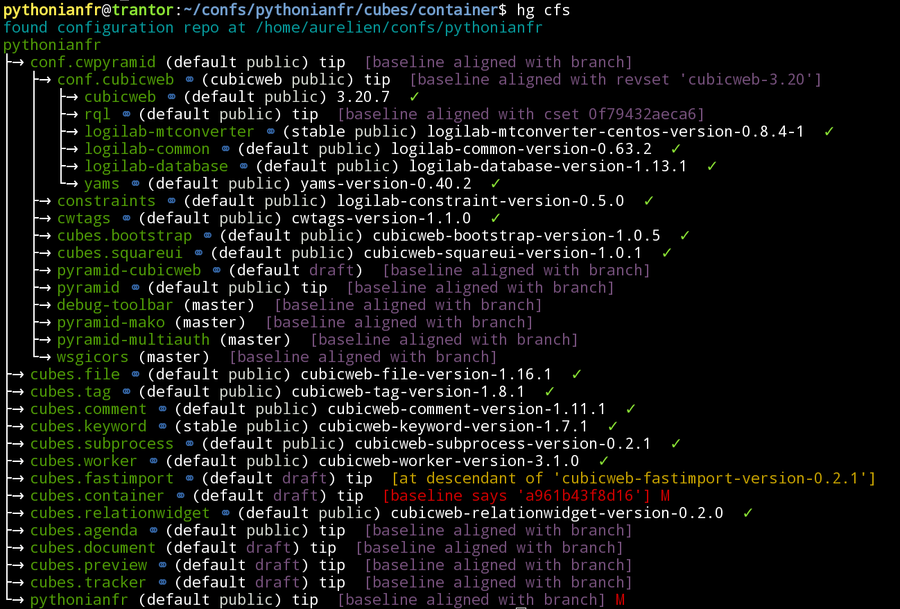 Confman can manage a tarball (.tar.gz or .tar.bz2) as a managed repository.

Note that only basic feature is supported for now: the tarball is downloaded and uncompressed automatically if the corresponding layout is missing.

Confman has experimental git support. Top-level configurations must reside in a mercurial repository.

The guestrepo mercurial extension was born at the same time as confman and both provide roughly the same basic services (though, e.g. guestrepo does not handle well recursive configurations).

confman can read and write guestrepo configuration repositories as well as its own.

Additionally, it is possible to expand a guestrepo configuration, as examplified above (the cubicweb configuration is currently maintained with guestrepo and its file format).